Home>Adventure>Lori, Where have you been?

You may be wondering what I am doing these days. I know I wonder what other people are doing. Never mind those folks that travel. But all folks these days, I am wondering what their lives now look like. I must say that it is very scary, these times, but it has opened up a whole new way of looking at what one can day on a daily basis with all of the extra time that is available. Having said that, that is not the case, and may not be the case for a lot of people, but is not the case for parents who have had to not only work from home but also parent and teach their children on a full time basis. Well, they were always full time parents, but now they are teachers, and having to complete their work in a timely manner while at home. I truly admire those folks and what they are accomplishing.

For me, I have had to cancel a couple of trips, and stopped, suddenly, all conversations I’ve been having with folks around the world and how I was planning to visit them. Will it ever return to that level of engagement? I don’t know. I was in talks with Scotland, the United States, Brazil and local places such as Calgary and to a lesser extent Manitoba. ‘

To tell you the truth, I’ve been in a bit of a funk. Do I keep my website, which actually had a lot of visits early on, but all of my Pinterest and Facebook and Instagram has gone down engagement-wise. I didn’t want to go in another direction as I felt that I had paired down what I wanted to do with my website and my online job. And to go another direction just didn’t feel right. It still doesn’t feel right. I feel that I still want to keep to the plan, but that has been put on hold, to be sure.

I was, and am still to an extent, sort of angry. I’m angry with myself, I’m angry with the new direction that my life has taken. I thought that I was on a very fine trajectory, and that things were starting to look fine for me, or at least look like they were going in the direction that I had envisioned this website to be going. Numbers were going up across all of my platforms, and I was feeling that I was making good progress. I had learned a great deal about having an online presence and going forward.

Oh, well. Enough complaining and bitching. Life goes on. My life is good. I am happy that I am healthy, and that I live in a great country.

So what is going on in my life now? I was able to make one quick trip to BC to visit a daughter who had moved there, and I had not seen her home since the move. It was so nice. Along the way I saw a grizzly bear, which is always exciting, along with all other forms of animals. The Jasper Banff highway is one of the most spectacular roads in all of Canada, and I was happy to go on it.

I have made it a point to entertain more, and get to know my neighbours more. I have spent more time being creative. I like to draw and sketch as well as knit. So those are a few things that I’ve been doing over the past three months.

I have taken on a couple of contracts (and I say that loosely) to review things. One of them is a book or company called The Adventure Challenge. They produce the most amazing books which give you ideas of things to do, along with costs, time, who to do them with. For instance, one of the things to do in the couples book was to bake a pie together. And this is something that I did with my husband one afternoon. The fun part is that the least experienced baker or cook is the one to do the baking, and they are to do it blindfolded. Yes, that is what we did, and I took some pictures, but to tell you the truth, my husband did a very fine job. He basically had to put it together, but you can get really creative and have them roll out the crust, for instance. I wouldn’t recommend cooking anything on the stove. One of the more dangerous things that my husband did was cut up bananas. So we made banana cream pie, and also I had prepared the cream part as it was cooked, as well as the topping because it was whipped up at a high speed. I didn’t really want him to do anything too dangerous. He did use the knife to cut up the bananas, and he did fine. No blood. So I do recommend The Adventure Challenge to spice up your couple’s life, your friends’ life and your family life. It just gives you some awesomely creative ideas of things to do. Who doesn’t need that at a time such as this?

Another thing that I’ve been doing is studying the book White Fragility with my family via Zoom. Our eldest daughter has been leading us as a family in the book study trying to understand racism, and how it relates to us individually, how it’s hard for certain ones of us to talk about it, what it means in today’s world, et cetera. We have only just begun and are only on the third or fourth chapter but it has been eye opening.

Cooking is another area that I have been pursuing, I have always liked to cook, so it’s not a stretch, but I’ve been spending a bit more time thinking about what it means to eat healthy. So there is another area that I am working on, and I’ve been asked to review the book wilderness chef. It is a book about cooking over campfires, et cetera, and I look forward to talking about it. 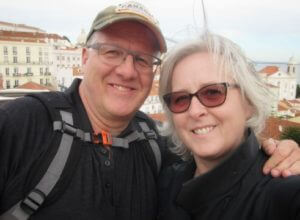